RSD's Distribution Networks: Where is shelter being provided?

The Karachi-based Pakistan team has identified four different geographical areas of different terrains where no relief aid has currently been provided and is being requested of us. We are working with local individuals through various grass-roots distribution networks, and will be reaching individuals/families that are currently sleeping without any shelter. A point to note is that grassroots networks (usually accessible by collaborating with those originally hailing from affected areas) are the single best way to get to inaccessible areas at the moment, especially as Pakistan does not have sufficient helicopters at the moment.

These geographical areas are:

a) Surul Valley, Bagh, Pakistan: Located beyond Bagh and only accessible through trekking, this valley is being reached by Imran Saithna, a London-based consultant and RSD team member, who is working with an independent team of international volunteers and physically setting up shelter for the villagers. Imran has taken pictures of his visit to these villages on 22-23 October, 2005. To reach Surul Valley and aid in Imran's efforts, RSD has partnered with the distribution network of a prominent multinational, and through this, is actively engaging in a needs assessment of this area. Known villages that are being steadily provided shelter through RSD include the village of Surul, Bani Manhasan and beyond. RSD and its partners hope to provide shelter to approximately 10,000 people in this valley.

b) Village of Laoir, Pakistan: Located beyond Bagh very near the epicenter of the quake, this village is only accessible by a 6 hour trek by foot. Our Lahore-based Pakistan team is with working with Rafiq, a local from Laoir who has been working for Lahore-based Arsalan Sheikh for a decade. Rafiq reported that this village currently has about 200 families that only have a few blankets and some billboard material to sustain them, and have yet to receive any proper aid due to its location. Our Lahore-based have arranged for our tent donations to be driven from Rawalpindi with Army escorts to the point closest to the village by truck. At that point, the truck will be met by Rafiq, who will unload the truck with fellow villagers, and carry the tents on foot back to the village. We hope to reach the people of Laoir through this method within the next few days, and distribute about 100 tents. The total requirement for the village of Laoir is be about 200 tents, depending on the size of the tents.

c) Aligra and a neighboring village, Khaki Region near Ogghi, Pakistan: Comprising of approximately 10,000 people, these two villages have yet to receive any aid. Vehicular transport can only go up to a certain point (as the road ends) then it is a 15 kilometer walk to the villages. Our Karachi-based team is working with Javed, from Aligra, who has been working for Karachi-based Ayesha Hasan for about a decade. Javed's cousin runs a commuter bus service and will use it to transport all relief items and cash donations to the village safely; he has already taken one shipment. Javed’s brother Afzal will receive the relief goods and is in charge of distribution. We hope to reach the people of these two villages within this coming week, and distribute about 100 tents. The total requirement for these people will be about 1600 tents, again depending on the size of the tents.

d) Kashmiri Villages approached by EHD (Education for Human Development):
We are closely working with a small non-governmental organization (NGO) based out of Islamabad, which is working in the following villages in the Northern areas: Haroot, Dhak, Mandani, Bakhnal, Chatarian, Nakar, Nadhrean, Rangali and Barrian. RSD is facilitating provision of tents and shelter to EHD purchased by EHD's funds. 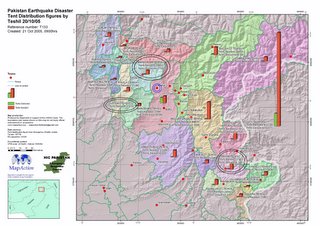 Circled in Black:
Approximately 15 tents (some donated) have reached the village of Elahi, which is inside the circled area of Battagram.
Circled in Blue:
Tents located for Battal - as funds arrive, our distribution system will take them immediately, in small batches

As of October 29: 30 tents were mobilized and on their way to Rawalpindi, with an expected delivery date of Tuesday, November 1, 2005.
Tents have also been located for Aligra and a neighboring village north of Oghi - as funds arrive, the tents will be purchased and distributed immediately.
.

Types of Tents: Our first order of 18 tents (costing PKR. 3500 each/approximately USD $58) consisted of single-ply, canvas material tentsl. Although we would have strongly preferred a more durable make, resources were limited especially at the time of our first order and due to shortage of time and an immediate need, we placed our order.

Recipients of Tents: Our order of 18 tents was distributed in two areas. The geographical areas were decided upon in response to individuals from these areas requesting tents from us.

1) Villages in Battagram: We dispatched 8 tents through locals hailing from eight different villages in the Battagram area. These eight individuals are part of the lower administrative staff at Ernest & Young, where one of our Pakistan coordinators - Nasir Ahmed, works.

We share Niaz’s story – a survivor from the village of Elahi, which had an original population of 300, but experienced an estimated 100 deaths in the earthquake. Most of the houses in the villages are made of mud and could not withstand the quake – what is left now are a few standing structures, which the villages are afraid to enter, and flattened houses.

Niaz explained that at the time of our donation, there has been no government aid in the village he is from. Choppers once air dropped food, however it was dropped from such a height that all the containers broke upon contact with the ground. Although we have given single-ply tents in this higher-plain area, the desperation is such that Niaz was very happy with the tents and conveys his thanks to our donors who made this shelter available to him and his family.

Name: Relief Shelter Drive
Location: Organizers located all over US, UK and Pakistan